Jon: Hello! Welcome to the show. Right now I’m waiting for my team. The weather today is wonderful! I’m enjoying the cool weather before our heat wave hits. I’m waiting for Holly to come. I think Holly’s shy. 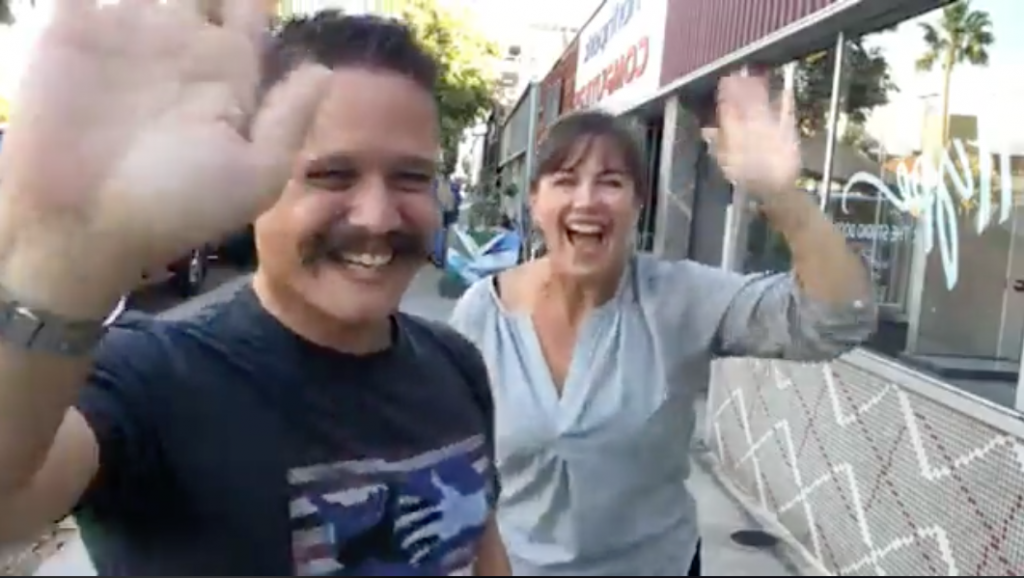 Jon: This is Holly! She will be at the computer, answering any questions you may have for me online. From now on, I will be  showing 5 different artworks, and including a link for each one with more information about the meaning of the artwork. Now Holly’s going back to the laptop! Thank you Holly!

Jon: Now, we have two different buildings: The Studio Door and Hype             (http://thestudiodoor.com). I’m taking this opportunity to share this information in celebration of Deaf Awareness Month! Through this event, the Deaf art will receive lots of recognition. This is a very nice neighborhood with a strong art community. The famous Ray St (http://www.explorenorthpark.com/post/ray-at-night) is right around the corner, and this is why I was thrilled to have my artworks, as well as your artworks, shown in the gallery! Ready for my presentation? Let’s begin! 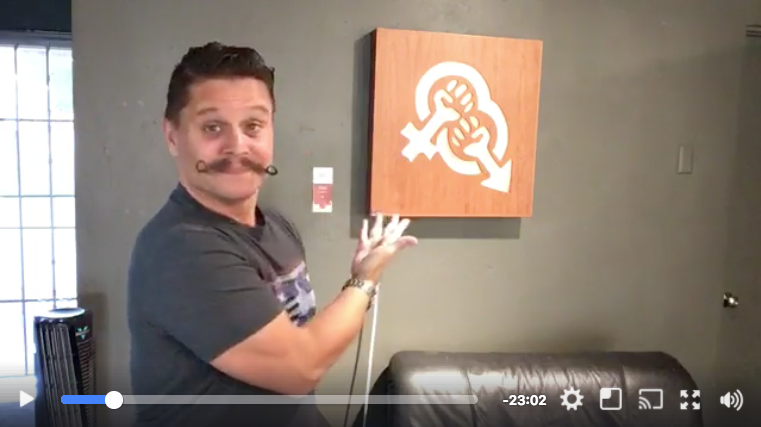 Jon: Before I begin, I wanted to let you know that the camera will be a little all over the place. There will be a total of 3 or 4 stops along the way. We have lots of different artworks done by different artists throughout the gallery, but for now I’m going to focus on my own artworks. You will see a link pop up, and this will go into more depth about the meaning behind the artwork.  My presentation will focus on my thinking process and how I came up with the idea of the artwork. You may notice this artwork is the sign for support, and shows the symbols for male and female. I had seen a lot of issues in politics and was at a meeting one day when I got thinking and had this feeing that I really wanted to do something about it. This was back in 2012, when I decided I wanted to become an artist, but had no idea where to start. I knew that many people in the Deaf community knew me as a videographer, editor, and actor, but not yet as an artist. Growing up, I was truly an artist, but rarely showed it to the public. This was my first artwork that was a part of getting involved in society and raising awareness. Many men today are awkwardly approaching the issue of women and their strong skills and talents. This is because of the traditional values of a dominant, working male, but men need to take a look at the bigger picture and see that women have so much skill and potential in society. For example, say a company is hiring and they have to make a decision between what is best for the people and what will make their company successful. A woman could have so much to provide that would greatly benefit the company, yet they disregard her because she is a woman and immediately make assumptions. They could provide things like love, peace, knowledge, and experience. To create this artwork, I reached out to one man named Ron Trumble, who is Deaf, skilled with making products out of wood, and lives in Oakland. You may have seen some of his artworks, he has a signature pole-shaped base with a flowering top. I worked with him, and he is honestly a very skilled artist. You may notice the white background; this is actually a light. He worked very meticulously to put the whole thing together and I was very impressed. I made a total of 4 of this artwork; 3 were sold and I kept one. This last one is still available, and if it is too big, we also have limited edition prints of the same artwork that were made in 2012. The link that I will add will have more information about this artwork. Ready for the next artwork? 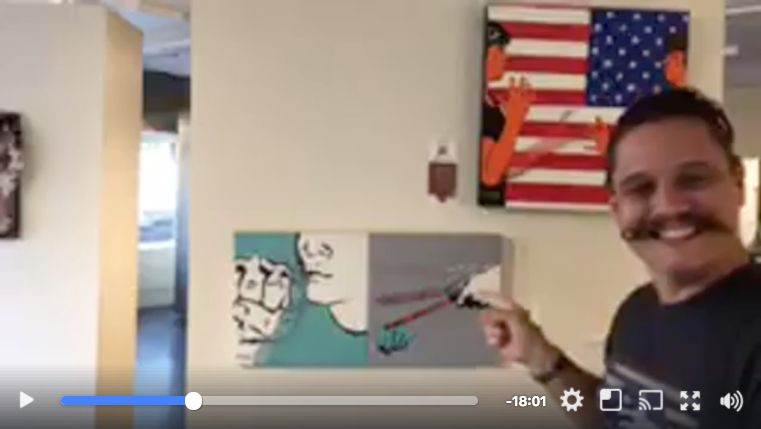 Jon: This first artwork shows “kiss-fist” and a smack on the hand from a ruler. This was made on two separate canvases that are connected. I felt that it had to be two separate pieces instead of together in one to show two different times. There is more information in the link, but in an essence, I used turquoise in this artwork to represent community. I was influenced by the color of the logo for the Frontrunners (http://frontrunners.dk/curriculum/)  and how they strongly represent the color. I became obsessed and the color turquoise excites me now, and sparks my creative thinking. I have actually gone through 4 or 5 cans of turquoise paint because I believe it to be a key color in spreading the word  through the community and also to raise a stronger sense of community. Back in the old days, Deaf Club created a natural sense of community; they did not have to emphasize community at all. Now that Deaf Club is dwindling, there is a need to advertise community and raise awareness. So, I’m trying to spread the word through art. That’s why I went through 4 cans of turquoise paint! The turquoise fist in this artwork represents a passionate feeling of anger towards the people that tried to control us. To take this anger and make it into something positive, we change this fist from an angry fist to a kiss-fist, using a little bit of reverse psychology. 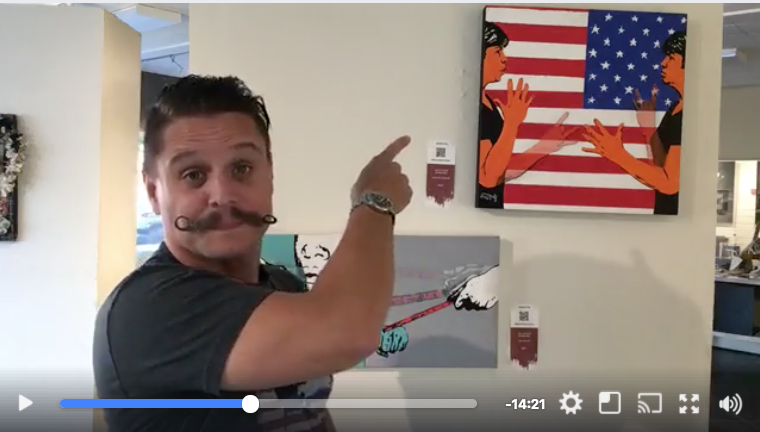 This next artwork was inspired by something that had a big impact on me. I feel like there is such a big difference between saying “ASL is important” and actually wanting to get involved and spread awareness about ASL, so to summarize this, I created this artwork titled “So Awful, So Good’. I put the negative first to attract attention because it sparks curiosity, but if you see a positive first you might just think “So?”. The way the hands appear to be moving in the artwork is inspired the VCR and how motion looks frozen when you pause it. I actually have a series of artworks in this style titled “VCR Pause”. I used to have a kind of obsession with the VCR, pausing and playing it so much that my pause button actually broke! This was way back in the 80s, and that little obsession was still playing over and over again in my mind, so I decided to make an artwork out of it! I can discuss ASL thoroughly in and out, but the main focus of this artwork is that with the use of ASL, we are able to understand the politics of our country and what is going on with passion rather than looking at a black-and-white statement of something that happened. When someone speaks, I don’t fully understand it, but in ASL everything makes sense. Through ASL, we can discuss what is going on in our country and get both perspectives of it, both the good and the awful. Ready for the next one? I have mixed feelings about this one. 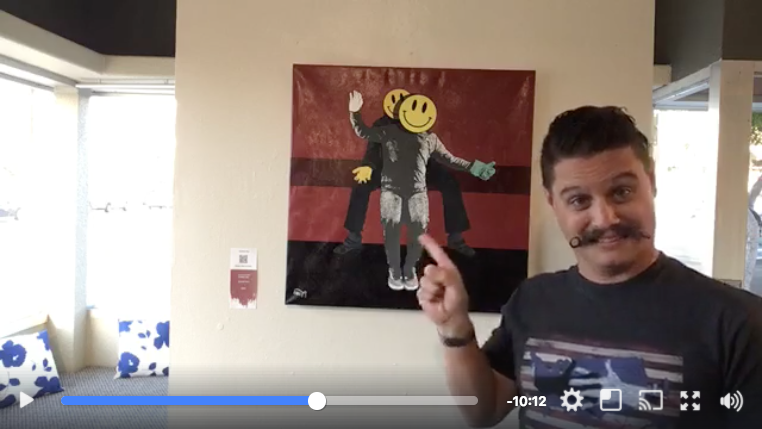 Jon: I honestly don’t love this artwork, and this is because it is very emotional and somewhat disgusting. I had it hung up in my home for a while, and it made me angry. After viewing the link, you will understand why this piece is perfect for an event like the one we have here, or any place where it will start a discussion. This artwork strongly represents a reoccurring problem that i had from K through 12. Once I graduated high school, I tried my best to forget about it. I was 18, on a new journey moving forward, and tried to keep all of my thoughts pointed toward the  future. This artwork is me looking this problem in the face. In 2012, it resurfaced and I realized this problem is still prominent today. I gave a presentation titled “Pro-Hands” to encourage and inspire grades K-12 to imagine their greatest desires and achieve their goals. I had discussions with different people at the different schools I visited, and they all has the same problem. It took me about 3 years to complete the artwork. I started it as a rough draft and every time I tried to come back to it, I had a feeling of disgust and didn’t want to deal with it, so I kept putting off its completion. One of the high schools I visited described an interpreting situation in which the interpreters have a superior who criticizes the students. I felt that it was wrong and I wanted to do something, but I’m not an educator or a part of the school system in any way, so I just had to watch it go on. This story made me feel like I was being shot at and had bullets all over me. Instead of saying nothing, I took the bullets out and created an artwork out of them. You may notice the smiley face in the center. It was inspired by a documentary (http://www.imdb.com/title/tt0473107/) I watched that explained how big businesses like Walmart are able to sell their products for so cheap. The film talked about how they are able to pay their laborers very little, taking advantage of them, and keep the extra money to create more efficient production, yet still put on commercials showing their employees with big, smiling faces. This makes me think of how clowns were once happy and innocent, but are now shown to be scary and dangerous, dominating the horror industry just like Walmart is dominating their industry. I think I’ve said enough about this artwork. The next one is pretty cool. 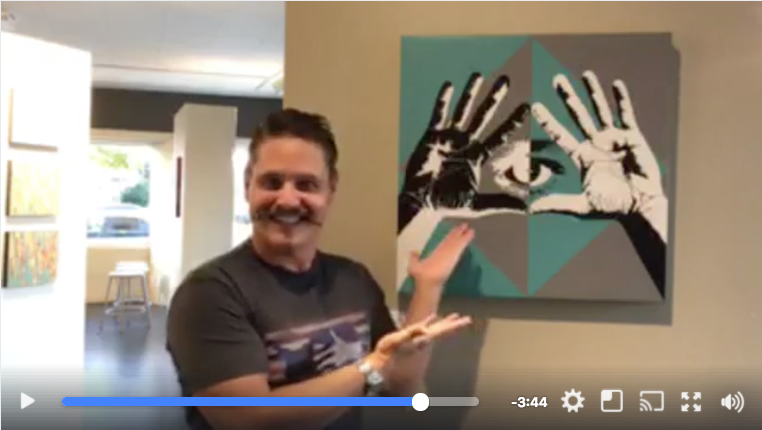 Jon: Yeah! Turquoise again! I was talking with a friend and he explained to me that the eye in the floating pyramid on the back of the $1 bill represents something that has not been finished, and that there is always room for improvement and progress. After I learned this, my mind was already filled with ideas. So, I do not feel like ASL is done with. There are still so many discussions to be had, so much more to be learned, taught, and improved. So I tied in the message behind the $1 bill, turquoise to represent community and the current studies in linguistics. Just like how in America we always have people working to make the country better and solve issues, the ASL community is doing the same. The eyes and the hands are always related to make ASL. This is one of my favorites compared to the previous artwork. Ready for the next one?

Jon: You may be wondering what the difference is between The Studio Door and Hype. (cut off due poor connection with WIFI)