Who is Alexander Graham Bell?

Jon: Now, I want to grab the opportunity to have my daughter will join with me on this vlog. We are talking about Alexander Graham Bell. Who is that person?

How much do you (Renny) know about AGB?

Renny: He invented the phone and he’s probably a smart man.

Jon: That’s what she learned about AGB from a public school when she mentioned that he’s smart.

Do you (Renny) know what the story is behind of AGB?

Jon: That’s why she knows him by as little as he seems like a smart man that invented the phone.

Now, I will grab the opportunity to explain to you what the story is behind AGB. He was into speech therapy called, “Visible Speech” that was he before invented the phone!

Renny: I wish that I knew about it before.

Jon: He was excessive on speech therapy for a long time until the phone appeared. He was very successful after inventing the phone and convinced people to donate to him. Most of the funds went to improvement of speech therapy and audiology. We, Deaf community, introduced him to “Sign Language” as an advantage! However, he disagreed with Deaf community and said visible speech is the solution. So, he was still excessive on the speech therapy continually. No matter his philosophy on deaf culture because the phone were successful as proven sufficiently.

Renny: I wish that I knew what’s behind AGB’s story.

Jon: Important! When you look someone up that’s successful, check the person’s philosophy with the background that might fit us as Deaf community or an individual. Be supportive to the person more than just someone who invented.

Do you (Renny) have someone to look up that been successful and inspired. Of course, would you check person’s background? 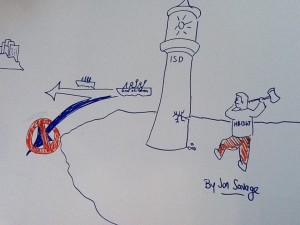 This vlog introduces viewers to HB1367, explaining what it is, where it is in the legislative process, and some reasons why we should stop that bill.

November 9, 2011 , ASL Story Comments Off on Sipho the Lion: Review

ASL comment about the video of “Sipho the Lion”

An animated film by Braam Jordaan was screened at the XVI World Congress of the World Federation of the Deaf 2011 in front of 2,100 delegates from 125 countries. Own a piece of history. The DVD is available to purchase online — www.braamjordaan.com.

She getting ready for KODAWest camp!